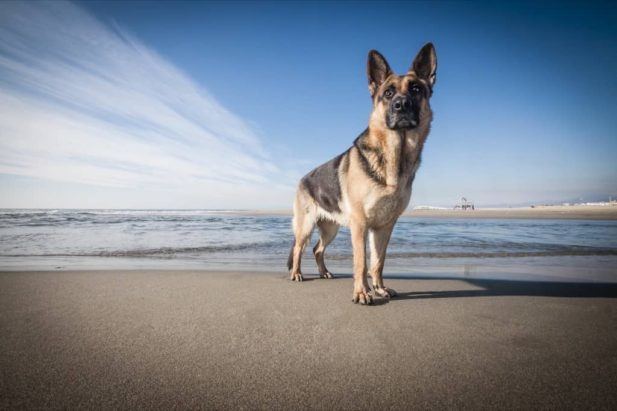 A lot of people from the US and Canada are interested in how smart dogs are.

According to the findings of a recent language development test the average dog has the mental abilities of a 2-year-old. In terms of  ranking, the top three are Border collies, Poodles, and then German  shepherds.

But when it comes to training, German Shepherds are  considered to be the best. Police and special forces use them almost  exclusively.

Border Collies and Poodles might be more intelligent, but they are not as trainable as GSD’s.

​The  German shepherd is a highly intelligent breed of dog with a great deal  of stamina and a ‘sharp’ mind. In spite of the findings of the test  described above, most dog experts consider the German shepherd as the  most intelligent dog breed in the world as well as one of the easiest  breeds to train.

The German Shepherd has a fast and retentive  memory. This helps it to remember words of importance, commands, and  tricks that you may teach him or her. The intelligence rolls over  directly from the days whereby the level of intelligence was critical  for a keen herding and working dog. The German Shepherd had to be sharp,  attentive, and logical to effectively watch out for the sheep under its  custody.

The  shepherding is mostly a thing of the past now, but the dogs are very  focused on their owner and have strong retentive memory. German  Shepherds watch out for the people they care about and respond to  stimuli quickly. This is the reason why they make for excellent  protectors.

With  all this talk of intelligence you might mistakenly believe that you  will get your German Shepherd already magically knowing basic commands.  Your German shepherd will not come understanding when to ‘lie down’ or  ‘sit’ or roll over, or when to ‘start’ or ‘stop.’ German shepherds are  quick learners but are not psychic.

You should therefore not be  surprised in case it takes some time for you and your German shepherd to  start learning how to understand each other. You must also be aware  that German shepherds are constantly learning so be careful of the kind  of example you set for your dog.

​German  shepherds are a highly intelligent dog breed. Therefore, respect your  dog’s intelligence and ensure that you set a positive example and offer  both negative and positive reinforcements when attempting to train your  dog.

While behavior may be partially inherited, it is also  learned. It is as much your responsibility as it is the breeder’s to  ensure that you train your dog properly. Good owners make for good dogs.

​German  Shepherds ​the best dogs in the world. ​Here are some nice products  that I have been using to show my appreciation for this breed.

Twelve months of the cutest GSD puppies you  have ever seen. Hang it in your kitchen to start the day with a smile,  or in your office to cheer up your day.

Swarovski is world famous for their stunning  line of crystal animals. Show your love for German Shepherds with an  elegant statue on your chimney or desk.

Good nutrition is vital to a happy and  well-performing dog. German Shepherds have uniquely high mental and  physical activity levels. That means that they require specific food  which is high in energy and nutrients. Royal CANIN is a world leader in  high quality dog food and has poured years of research and expertise  into this food. it contains all the daily ingredients your GSD needs to  be the best dog he/she can be.

​Most burglars will think twice before breaking  into a house guarded by a German Shepherd. But they might still damage  you door before they find out. Save your locks and windows by placing  these signs around the house. Oh, and if you care, it might save the  thieves too.

When  I first got my GSD, I was super excited. For the longest time, I had  been dreaming of owning and training a German Shepherd and the dream was  about to come through. Things turned out differently though. As she was  growing up, I started having real problems.

House-breaking was  tough, but I got there in the end. What I couldn’t solve was her  constant barking and fighting with other dogs. And her pulling on the  line. So living with her became a constant struggle:

I  tried a lot of advice and went to a lot of training sessions, but the  problems kept coming back. I wondered whether to keep her because this  was not what I signed up for. I read all the well-known books; Training  the German Shepherd Dog (by John Cree) and How To Raise The Perfect Dog  (by Cesar Milan).

But it only made more aggressive! There was something missing.

Tthen I discovered something so important it changed my view on dog training forever.

Confidence  of the owner is the key!! Now that probably sounds like a no-brainer.  But wait, I am not done yet. When you read a lot of dog training books,  and try to use the advice, you naturally behave less  confident. You might be trying to remember that one exercise, or you are  wondering what the author would do in this particular case. Either way,  you are not acting confidently, and your dog senses that. Some dogs  will no longer respect you, others, like GSDs, will also become nervous  because they look to you for guidance.

Once I started using my own  little trick, and some additional information from The German Shepherd  Handbook, things really turned around.

Now, I know there is a ton of advice on dog training around. So there might be other ways to accomplish your goal.

It is, however, what worked for me. And there is no reason it won’t work for you, if you are having similar problems.

So  if you have, or plan to have a German Shepherd, I would recommend to  make sure to act confidently. There is a time to reflect on your actions  but it’s not when you are working with your dog.

These books also  really helped me understand and train my girl better. Without it, she  wouldn’t have passed her Therapy Dog certification!

In  my opinion books can never fully replace real life training with a  professional but they are invaluable in creating ones own understanding  and methods. Because we as owners are the ones who will be spending most  time with our dogs, and our behavior and attitude are going to be most  influential.