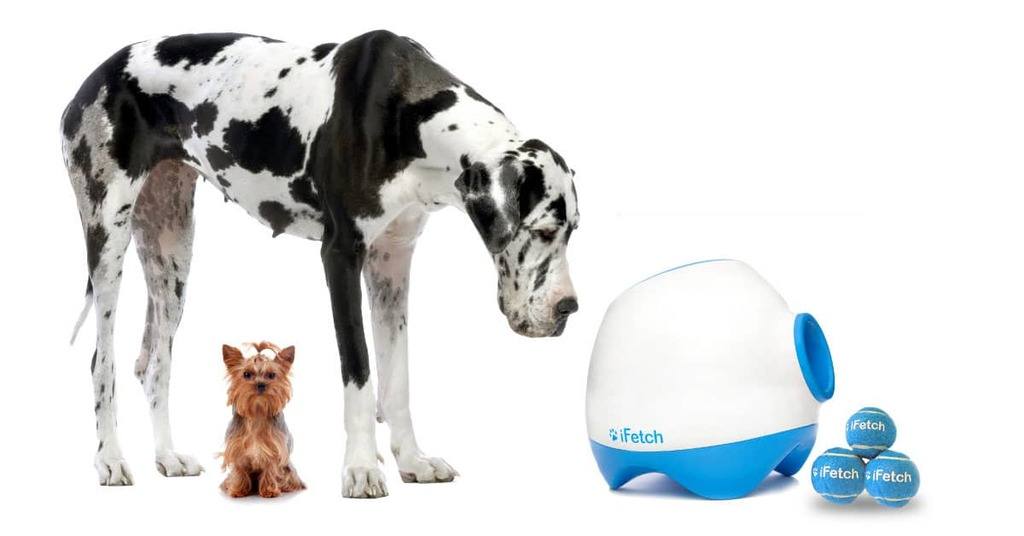 Whenever I open my Facebook news feed, there is always at least three ads for new dog toys. And they all start by saying that they are the biggest revolution yet.

At this rate of revolution, we will conquer the universe in no time:).

So I was naturally apprehensive when we saw the iFetch line of products. Playing fetch with a dog is supposed to be the simplest game ever, why would I need an expensive product for that?

But the visitors of Superzoo and Global Pet Expo have awarded it for best dog product, three years in a row. That cannot be a coincidence, so I had to test it for myself.  Now my dog (buddy) is 1,5 years old and has endless energy. So much that I am struggling to give him the workout that he needs. Not that I can’t walk, or throw balls, but my job is pretty tiring, and I need to relax too.

Dogs that don’t get enough exercise generally develop problems.  When you go for a walk, they pull like crazy.

When there is someone at the door, they bark like crazy.

And they get overweight, with all the problems related to that.

So how does it work?

Fetch is running three products, all made to let dogs play fetch. We decided to try the iFetch Too, because it uses standard sized tennis balls. This is great because the balls get chewed and drooled on a lot!

This model targets medium to large dogs, but it works for any dog that likes regular tennis balls.

iFetch Too is basically a big bowl that shoots out any tennis ball that gets thrown in the top. The distance can be adjusted to match your dog or yard.

The idea is to teach the dog to fetch the ball, bring it back and throw it in the bowl. The machine immediately fires it a good distance again, and the dog can give chase. As long as the dog keeps bringing back the ball, the game continues.  Playing fetch is considered one of the best workouts for dogs. It trains their muscles as well as their coordination and speed. And it burns a lot of energy, which keeps them in shape. Now I would love to give my dog a great regular workout without having to throw balls for hours! But there seem to be two hurdles to dog owner heaven:

But even if it would take some work to get it going, it would be a great investment. I can see myself sitting on the porch (working) while my dog is playing and having fun.

We ordered the iFetch Too online, and a big box arrived a few days later. The box contained the device, a quick start guide and set of tennis balls. Setup was as easy as turning it on and putting a ball in the top. The balls come out at quite some speed; better test it outside! I almost wrecked some porcelain by testing in the living room:)

So we placed it on the lawn, threw in a tennis ball and just walked away. Our dog immediately went after the ball but brought it back to us. But that wasn’t the plan; now we have to pick up droopy balls and place them in the bowl.

Now anybody that knows anything about dog training knows that consistency is the key. So we knew that the training would take some time to take effect. And it did, after four weeks Buddy started to place the ball in the iFetch. And then he improved very rapidly.

Sit Back And Relax

Almost every day we let our dog play with iFetch too. And it’s starting to show. Not only is he a lot more relaxed, but also his fitness and physique have improved a lot too!

We even had a few positive remarks from friends at the dog club, asking us why the dog looked so healthy.

He is much easier to handle because he gets to spend his energy regularly. iFetch Too has made our life a lot easier. And it has made our dog a lot healthier and more relaxed.

It took us three weeks of regular training to get our dog to us the ball thrower. Every dog is different, so others may learn faster or slower. But the investment turned out to be totally worth it! Sitting on the porch while Buddy is playing with the iFetch is priceless. Especially when we aim it to shoot the balls into the high grass, and he can’t find them.

During our testing the machine worked without a hitch. It was necessary to clean the wheels a few times, because drool accumulates on them.

And it didn’t always make the claimed distance of 40 feet. Sometimes it did, and sometimes it didn’t, we couldn’t figure out what caused it. For our place, it shot plenty far. If you need a ball thrower to shoot over 40 feet, then you might have to look at some different manufacturers.