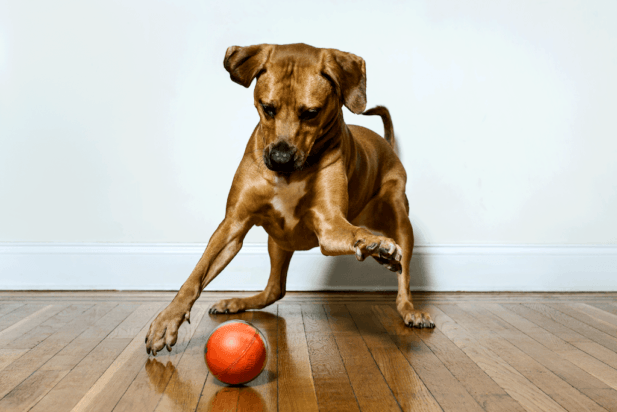 New products are being developed all the time. And most of them are not all that great. But now a new toy for playing with your pet is hitting the market. And this one looks to bring a some relief for caring pet owners that also have a busy life. Meet the Playdate Smart Ball. No it’s not some weird kinky toy:)

Every time we leave our pets alone we feel and see their  disappointment. Especially dogs don’t really like to be alone. And who  blames them? We don’t like to be alone either. The following TED  presentation shows how pets can be very much troubled by “mental”  problems. A dog chewing up the furniture or messing up the garbage can,  is often bored or stressed.

So whenever you are away from home you feel worried and concerned. At  least I do. You can buy some nifty camera’s that allow you to see what  is going through your smartphone. And this might give some peace of  mind. But it doesn’t really do much for the pet. They are still locked  up in a lonely house with nothing to do.

Playdate has created a solution for this situation. After a very  successful IndieGogo campaign they had the funding to bring their vision  to life. It’s a pet toy that you can control from your phone, anywhere  in the world. It allows you to see your pet, keep him or her active,  talk and listen, and take the cutest pictures in the process.

The device itself is a tennis sized ball made of durable poly  carbonate with a rechargeable battery. It comes in two sizes, 3″ and 4″,  to accommodate most sizes of dogs and cats. That doesn’t mean you can’t  use it for other pets too. Except for fish, but who knows what the  future holds. Inside the ball is a camera that allows you to see through  the clear housing. The camera remains stable and upright while the ball  moves due to a advanced stabilization system. Motors allow the ball to  roll and steer in any direction so you can make sure your pet gets some  great exercise. (Something that I believe is very important. Obesity  seems to be an increasing problem in pets too.)

The whole thing is controlled from a free smartphone app that is  available for Android and iOs. The app has built in features for  controlling the ball, similar to a video game. You can also use it to  record or take snapshots of the video feed which can get you some  awesome footage. According to Playdate the feed is fully encrypted so it  can’t be abused. You don’t want hackers to be able to see what is going  on inside your house.

Another very cool feature is that you can talk and listen through the  Playdate Smart Ball. And you can play a squeaky sound. Your dog or cat  will not know what is going on at first but they will catch up soon.  Imagine keeping up with the training of your dog from your desk at work.  What possibilities this can lead to.

A new Dimension in Pet Interaction.

Now I don’t believe that people should only play with their pets  through a smartphone. And probably nobody really does. But somebody is  surely going to remark how disgraceful it is to animals and what not.  They are wrong, because this product is going to just benefit both pets  and owners. So hopefully the smart ball will be available soon so we can  start trying this thing out. And the video recordings are going to be a  big hit on Youtube, I imagine.